I first heard the call of a Powerful Owl in Mount Rae Forest in Autumn, 2006.  The slow, deep “whoo-hoo” cry was instantly recognisable as it resonated throughout the forest.  The owl itself has lived up to its secretive nature and defied all attempts to be photographed.

          disturbance during the breeding period.

One night in 2008 I heard a completely different call – the high pitched “screaming woman” call of the Barking Owl.  This is sometimes heard early in the breeding season.  A landowner in this forest recounted how he had seen this owl and heard its more common dog-like “wook wook” territorial call.

The prey species of the Powerful and Barking Owls, including the threatened Squirrel Glider which has also been identified in this forest, attempt to remain silent by necessity.  To survive, a Powerful Owl needs to eat the equivalent of a possum every two to three days.  Many of our fascinating marsupials, unique to our island continent, call this area home.

It was the grating call of Gang-gang Cockatoos, described as being like a rusty gate hinge , that initially sparked my interest in the birds of this forest.  During 2002 and 2003 they flocked in large numbers (up to 20) at a spring fed dam.  I would regularly go to watch them in their feeding frenzy, dropping leaves and ripping apart seed capsules, before swooping down to drink with their rasping cries.  They do not come in such numbers now, but breeding pairs are still seen and heard.

I was once woken by a dawn chorus of hundreds of shrieking and wailing Yellow-tailed Black Cockatoos.  They were slowly working their way through the eucalypts of this forest for seeds and wood grubs.  This went on for hours.  I felt like an unwanted extra in the Hitchcock film, “The Birds”! Three more bird species known in this forest – the Flame and Scarlet Robins and Varied Sitella have now been nominated for vulnerable status with the NSW Scientific Committee.

Various frog species croak, creak and even whistle like birds on the warmer summer nights.  One frog was identified by a former Department of Environment and Climate Change (DECC) frog consultant and licensed breeder of the Green and Golden Bell Frog, as the nationally threatened Alpine Tree Frog.

The realisation that Mount Rae Forest holds one of Australia’s rarest orchids, led to the calling in of DECC botanists and the National Conservation Officer of the Australasian Native Orchid Society.  The shy and mostly nocturnal wildlife of this forest could learn from these orchids.  The Buttercup Doubletail Orchid waits for precise conditions, sometimes going years between flowering events, and even then will only flower during a three week window of opportunity.  Only about 200 plants were known in Australia at the time of writing.  Twenty have been identified so far in this forest. 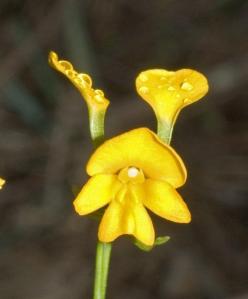 In 2005 DECC ecologists held a field day on my property to raise awareness of Mount Rae Forest’s threatened species and vegetation communities.  Hopes were expressed that remnants of such high conservation value might one day be protected as Endangered Ecological Communities and that landowners would enter Voluntary Conservation Agreements.  I responded to this call by exploring the options of covenanting my property, having it assessed and encouraging others to do likewise.  I started the process of collating information and nominating one of the rare vegetation communities of this forest with the NSW Scientific Committee.

“The area of Mount Rae supports a number of significant vegetation communities…..learn more about their unique attributes and some of the rare and threatened flora and fauna species found there”.  DECC: 2005

The owner and the Minister recognise that the conservation area contains a significant area of remnant Tableland Basalt Forest…. and contains a population of the endangered orchid, the Buttercup Doubletail.

“Tableland Basalt Forest …. listed as an endangered ecological community as, in the opinion of the Scientific Committee, it is facing a very high risk of extinction in NSW in the near future.”

A ‘phone call from the Project Co-ordinator of the local Landcare Group made me realise this forests value to the local community.  Over $300,000 of Federal monies, grants and private funding had been received to plant wildlife corridors, increasing connectivity to this forest.  Past plantings have led to a resurgence in local bird species.

In 2008 Roslyn Landcare Group received an award of High Commendation for Nature Conservation, based on their efforts to preserve this forest.  In 2009 Roslyn Landcare received the Regional Group Award for the Hawkesbury Nepean Catchment.

An adjacent landowner received funding to protect threatened species on his property.  My own property became a wildlife refuge and I trained to become licensed in the rescue and rehabilitation of our native wildlife through WIRES (NSW Wildlife Information Rescue & Education Service).  One young couple talked of turning their property into an eco-tourism venture.

My love for these natural areas, and the unique and fascinating wildlife they support, led me to make my home here.  It has become apparent to me that Mount Rae Forest is an important remnant within which many of the original plants and animals of this area still manage to survive.

However, there is another reason why I have attempted to share my passion for this forest.  You see, the very department that urged us to protect this area, the Department of Environment and Climate Change, is now granting approvals to non-residents for commercial scale firewood clearing. This is contrary to any meaningful attempt at reducing greenhouse gas emissions.

In an amazing back flip and against the advice of its own scientists who stated – “the proposed operation will have a negative impact upon the forest and other species of the Mount Rae area”, the Minister for DECC has granted exemptions from both the Threatened Species and Native Vegetation Acts.  Requests under the Freedom Of Information Act for these plans are refused. The department we turned to for protection , has become the logging advocate.  The trees which provide food, shelter and homes to our native wildlife are now consigned to the bulldozer, the chainsaw and the chimney.

The night time cry of the Powerful Owl still echoes occasionally through this forest in Autumn and Winter.  An eerie, plaintiff and lonely cry that I have never heard answered.  In the summer months, microbats (two species of which are listed threatened species) send out sound pulses as they fly through and below the tree canopy.  These sound pulses are at such a frequency that they cannot be heard.

While our native animals continue to cry and call out, they have no actual voice.  As a consequence I have now found my own calling.  I will endeavour to be that voice.  Unfortunately no-one is listening.